The rainforests have an extremely high conservation value with over 200 rare or threatened animal species, making them a very valuable place for scientists and citizens a like, almost a bit like a window into the past. This is unique to these rainforests meaning a more complicated ecosystem and a more valuable resource tool for helping to prevent further extinctions.

The Yellow Bellied Glider is an arboreal and nocturnal gliding possum that lives in a narrow range of eucalyptus forests from Northern Queensland to Victoria. It is a somewhat threatened species with large numbers of them being under threat in specific locations on the coast due to loss of habitat.

The yellow-bellied glider is a marsupial about the size of a rabbit. It normally has grey-brown fur on its back and has an off-white to orange or yellow belly. It has large pointed ears and a long tail that can grow to reach 48 cm in length. It has a dstinctive growling call that can be heard for miles and is used to communicate to between Yellow Bellied Gliders. If we were to lose the yellow bellied glider from our rainforests the impact would be a more noticeable one as the the yelo bellied glider is one of the larger predators therefore allowing more of the smaller species to increase reducing the availabilty of their food ultimately collapsing some of the ecosystem.

The southern leaf-tailed gecko has two species. One, Saltuarius wyberba, lives in the granite belt of northern New South Wales and southern Queensland, Australia (Both near to the location of the Gondwana Rainforests). They do their foraging at night on massive rock faces. They have been seen active at temperatures colder than minus ten degrees celcius. The other species, Saltuarius swaini, inhabits rainforests and lives inside large tree root systems and hollows of strangler figs making it perfect for rainforests. If we were to lose this Animal the ffect on the ecosystem would be a medium sized one, as Leaf Tailed Gecko's are predators to many small insects and animals so they keep levels of these insects. Without them we would see damage to plant species due to large insect feedings and a loss of a food source for some larger predators e.g possums.

The Velvet Worm is a minor ecdysozoan phylum. It has been compared to a worm with legs, a slug or caterpillar. These obscure organisms have tiny eyes, antennae, multiple pairs of legs, and slime glands (used for preying). They eat smaller animals which they catch by squeezing out an adhesive mucus and are particularyl known for their strange mating behaviours and for bearing live young. Although mainly found in the Southern Hemisphere the separation of Gondwana meant the spread of some velvet worms onto the land in that specific region as well as prefering higher air humidity that of Rainforests. 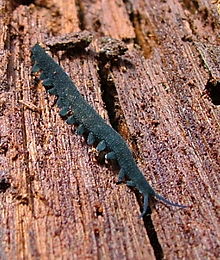 Pest animals include pigs, foxes, cats, goats and wild dogs. Some of these have the potential to become major threats in the future and both weeds and pest animals can move and spread. Where possible, efforts are coordinated to maximize pest reduction and impact.